Remaking LGBT America: by the numbers

Social media went abuzz yesterday with the announcement that the 2020 census will not ask respondents whether they are LGBT. Many reported the news in a somewhat sensationalist way, mistakenly implying that the census would not count LGBT people at all.

Rather than an overt tool of anti-LGBT policy, this decision to continue to not ask for LGBT people to self identify echoes a more quietly delivered executive order Trump made on Monday. The order focused on data collection rather than LGBT people themselves – leaving intact Obama-era protections of certain LGBT workers while completely dismantling the regulatory process designed to document and thus prevent discrimination.

The issue here is deceptively simple. Many took the census announcement as a declaration that LGBT lives are too unseemly or undesirable to discuss on the census. Rather than that kind of cold sneer or haughty disgust, the explanation offered by the census’ director is tepid, measured, and legalistic. As he put it, “there must be a clear statutory or regulatory need for data collection” which he and others did not see as merited on this issue. In the history of both of these data collection projects, critics have asked for observation and study. The purpose of that is to demonstrate that anti-LGBT sentiments and practices exist and therefore understand how to challenge them. Thompson made quite clear that that’s simply not a consideration for the Trump administration.

Frankly, that shouldn’t be a surprise. Trump branded himself throughout the Republican primary as atypically amicable with LGBT people, even as he held us at arm’s length. What many cisgender and straight observers of that often seemed to miss was the expectation of what he would receive in return for that – not only did he assume we would be desperate to support him for the slightest tolerance but he expected us to curtail our experiences with anti-LGBT policies and attitudes to what he needed.

In his hands, anti-LGBT animus became not a common experience in this country, but a marker of foreignness. The reality that most LGBT Americans experience bigotry more regularly and acutely from other Americans is an inconvenience to the grand narrative Trump wanted to paint. Now, in the halls of power, he is doing what he can to disarm LGBT people of the overwhelming data that shows that. 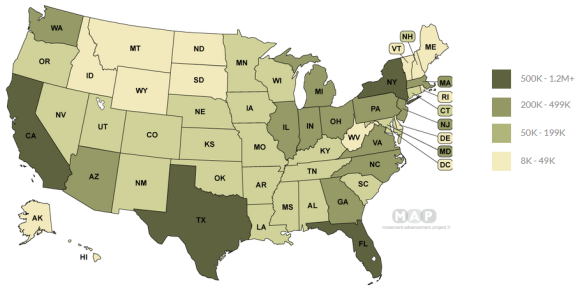 The Movement Advance Project constructs maps like this above one of the estimated overall LGBT population in different states without census data, as it has never been collected as part of the survey, from here.

Beyond his quixotic bid to build LGBT support, there’s an implicit threat buried in all of this. There is, as of now, supposedly no need to collect that data. What that admits is that the facts on the ground could change. If LGBT people become understood as not a group to hide the data from, but to gather it on, then perhaps they would put it back on the census. Or, failing that, let slip the dogs of war – Republicans in state government are already pushing to reinstate pre-Lawrence laws or similarly invasive and hostile measures, especially against transgender people.

The choice the administration is giving LGBT people is a simple one – obey or become reacquainted with survellir et punir. The self-styled deal-maker is offering LGBT people one: accept the quiet and private anti-LGBT bigotry that pervades the country or prepare to feel the heat turn up again.