A kingly presidency casts a long shadow in Republican thought

In the cavalcade of strange that was last night’s townhall debate, one particular exchange stood out for many:

DONALD TRUMP: So we’re going to get a special prosecutor, and we’re going to look into it, because you know what? People have been — their lives have been destroyed for doing one-fifth of what you’ve done. And it’s a disgrace. And honestly, you ought to be ashamed of yourself.

MARTHA RADDATZ: Secretary Clinton, I want to follow up on that. I’m going to let you talk about e-mails.

HILLARY CLINTON: Everything he just said is absolutely false, but I’m not surprised.

CLINTON: Last time at the first debate, we had millions of people fact checking, so I expect we’ll have millions more fact checking, because, you know, it is — it’s just awfully good that someone with the temperament of Donald Trump is not in charge of the law in our country.

TRUMP: Because you’d be in jail.

We’ve heard this same pivot from questions of legality to morality before, from someone very different: Mitt Romney.

If for no other reason than his clear opposition from early in the primary, Romney is quite clearly not interested in supporting Trump. Even still, as much as he might disagree with Trump, this moment last night especially echoes Romney’s own statements at funnily enough the corresponding debate in 2012. This pattern, from such different candidates, speaks to an emerging political tendency in the Republican Party.

Many seem to have trouble recalling this, but many of Trump’s lines can be seen as having passed through Mitt Romney’s hands if not originating with him. All of the ingredients for a Trump-style candidacy were there in 2012, even if missing the curiously distinctive feeling of Trump himself. Quickly, who said which of the following?

1: “It was a terrorist attack, and it took a long time for that to be told to the American people. Whether there was some misleading or instead whether we just didn’t know what happened, I think you have to ask yourself”

3: “The president’s policies throughout the Middle East began with an apology tour and pursue a strategy of leading from behind, and this strategy is unraveling before our very eyes.”

One particular point stood out then in 2012 and stands out now, and perhaps demonstrates the unique effects of Trump on this shared vocabulary. That is, the notion of the president as someone unconcerned and beyond daily legal matters. Just like the magic power of some version of the phrase “islamist terrorism,” both Romney and Trump share an idea of an almost monarchic presidency.

It’s easy to overlook the basis of agreement here. As I wrote about at the time, Romney’s borderline kingly presidency was shaped by inaction, with him promising to set a moral standard of sometimes hiring women. His idea of the presidency was not one of creating legal realities to prevent discrimination (in this example), but actively avoiding that for simply setting an example.

Trump’s promise to investigate and jail Hillary Clinton if elected is not only more proactive than that, but bombastic in tone. A violation of basic principles of democratic governance, it’s much harder to overlook. Still, let’s not erase the roots of this kind of Trump-style despotic presidential policy.

At its core, his explanation for why he would tap a special prosecutor to investigate Clinton is tonally quite similar to Romney’s justification for having “binders full of [the résumés of] women”: it’s an act of moral conviction, not legal action. He presses the point on the basis of Clinton seeming mendacious, not there being the possibility of broken laws (in part because there isn’t much of that left after so much investigation).

Questions of legal standards take a back seat to morality – whether the particular concern is fairness in the workplace or conduct of a public servant outside of the realm of legality. The law is secondary or even irrelevant… in a position of literal executor of laws. 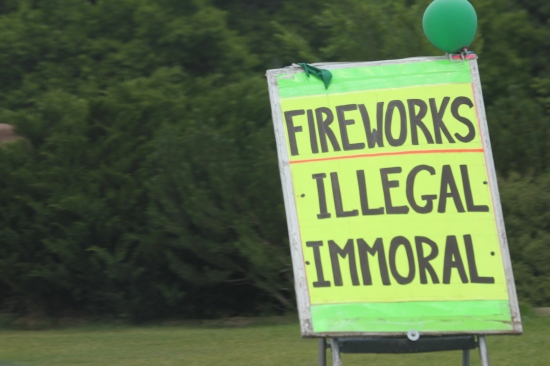 (Credit to Quinn Dombrowski, from here.)

Legality has long been understand in US political thought as not the be-all, end-all. From our founding, arguably, critiques of the legal system simply being how it is have been part of what has shaped us as a country. But from a revolution which began as a protest against voting and taxation procedures and policies of quartering and invasive searches, to a Civil Rights Movement about many of those same concerns, the classic concern about the limits of legality has been about correcting it with arguments from morality and decency, not replacing it with hazily subjective ethical standards.

The modern Republican Party in part seems preparing to break with that long tradition by not just approaching laws from a place of skepticism, but utter doubt of their existence. While Trump may have exacerbated those trends, this isn’t a new phenomenon and arguably a tendency that’s fueled his rise more than been a product of it.

Last night’s townhall debate has been transcribed here. For a video and transcription of 2012’s corresponding debate, look here.