Who hustles the hustler?

After months of progressives gnashing their teeth that Donald Trump only adds a glean of faux-populism to policy ideas that are straight out of Atlas Shrugged, many are celebrating that his campaign may have finally let the cat out of the bag.

With the Republican nomination locked up, one of Trump’s most prominent and earliest supporters, representative Chris Collins (R-NY) has qualified the Border Wall as probably going to just be “virtual”, and the mass deportations Trump has discussed as being “rhetorical”. The deeply xenophobic mentalities that animate a plurality of average Republican primary voters – quite literally popular ideas – have a long history of being floated by major Republicans only to be yanked back. For all his promises to break that pattern, it looks like Trump might at least go through the motions of moderation.

So in light of this apparent change of tone, the right-wing coalition continues to threaten to dissolve and their most likely success case isn’t the worst case scenario for people of color and others targeted by their politics. Amidst the overly eager left-wing cracking out the champagne, let’s all consider how Trump’s primary supporters will take the news about being tricked once again.

While these quotes began to surface describing how minimal and non-corporeal the anti-immigrant regime will turn out, a piece of Trump’s base pasted the face of journalist Julia Ioffe on to the photograph of Auschwitz prisoner number 6874 and sent her directly images contrasting “bad Jews” – antisemitic caricatures of Jewish men – with “good Jews” – a lampshade with the same caricature’s face. 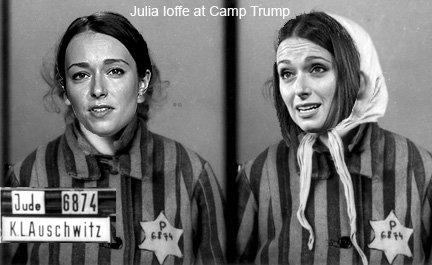 (From the collection of images she was sent or found, republished here.)

What prompted this avalanche of antisemitism towards Ioffe? She had questioned Melania Trump’s narrative about her family – and particularly her father – having traditional values. Ioffe had dug deeper, found a cavalierly abandoned half-brother Melania’s father had from an earlier relationship, and published in spite of a (noted in her article)  request for her to “respect [Melania’s father’s] privacy”. She interviewed the estranged relative himself for her piece. It seems he weighed in differently on  whether he should be included in this portrait of Melania’s Slovenian family.

The people still sending Ioffe Holocaust imagery edited to update it for more Trump-related uses think they have already won. They aren’t being guarded with their language on Twitter, because they don’t think there’s any reason to be – Trump has essentially won the nomination and they expect him to win the general election. The genie is out of the bottle, and it’s calling a Jewish journalist on blocked numbers and playing clips from Hitler’s speeches. The antisemitism isn’t new, but there’s a degree of brashness Trump has allowed it to adopt – because that type of attitude is what allowed him to upend all the expectations in the Republican primary.

In aggregate, this country’s social mores aren’t actually designed so that you can’t win prominent party nominations while advocating ethnic cleansing. That secret, historically the lynchpin of this extremist group not taking control of the Republican Party, is out. This isn’t going away. If anything, it’s going to get worse.